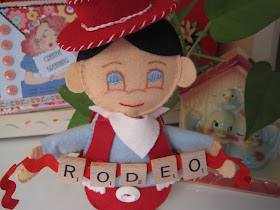 If you have followed my stories for quite a time, you know that my brother John is a proverbial Huckleberry Finn. Adventure and mischief seem to cloak him as comfortably as silt on the bottom of the mighty Mississippi. Who could ever have guessed that as the nation held it's breath waiting for the winner of the Mega Millions to be revealed, a voice from my brother's past would provide an ending to a story. 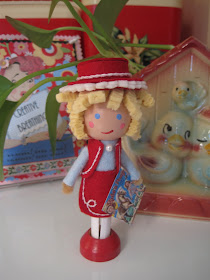 Deeana was just the type of girl my brother was crazy about; long dark hair and deep brown eyes, a Spanish beauty whose R's rolled attractively. My brother, in his mid-twenties was lean from summers lifeguarding and as dark of skin as she was. She thought he was Spanish as well. An immediate attraction that soon found the pair sharing an apartment together. 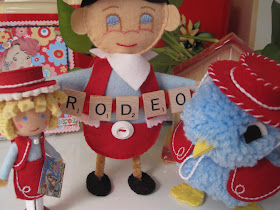 For my brother who has the wanderlust heart of a Gypsy, this was a step toward domestication I thought I would never live to see. I was invited with my family to meet Deeana and her large family. We fell in love with them all. 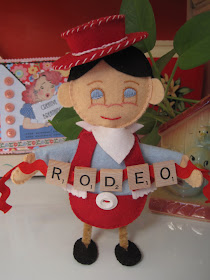 I will forever remember the weekend spent in John and Deeana's beautiful apartment whose walls were hung with my brother's beautiful art. My brother pulled me aside to tell me he planned to ask Deeana to be his wife. I would return to Ohio filled with such joyful expectation for my brother's future. A telephone call with bad news left heartache in it's wake. It seemed Deeana turned down his proposal. It seemed she wanted more. It seemed she had met someone with very deep pockets. A school teacher's salary was just not enough. John would not hear from Deeana for more than a dozen years. 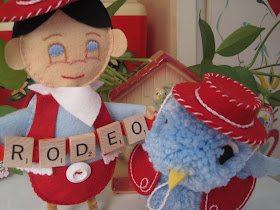 With the Mega Millions payout reaching dizzying heights, John and his lifelong childhood friend Greg purchased two hundred tickets at a 7-Eleven in  Maryland. The very store where the winning ticket was purchased. As the news would report, it seemed there was controversy regarding a McDonald's worker who claimed she held the winning ticket. This was not the case. She was not the winner. A call from the past, a voice with rolling R's. 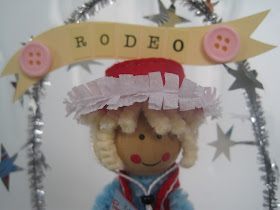 "John! It's Deeana! I heard on the news the unidentified winner of the Mega Millions is a teacher who says he will use his winnings to return to Italy to finish studying art. It's you John, isn't it!!!!" 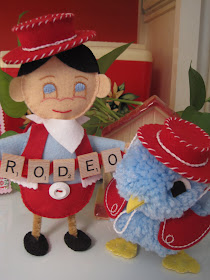 My brother replied, "Shhhhh! I haven't even told my sister yet. Don't say a word about this to anyone." Deeana quickly asked, "Can we get together to celebrate?" My brother said yes, the next day. 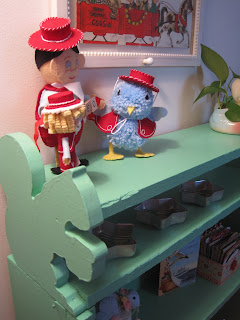 My brother called Deeana the next day before the time they were to meet. "Deeana, the worker at McDonald's isn't the only one who didn't tell the truth. I didn't win the Mega Millions, I'm still a school teacher who is so glad I wasn't worth enough for you to marry all those years ago."

"Springtime in the Rockies" 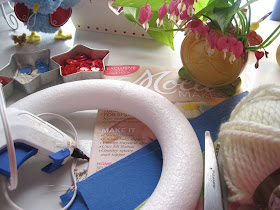 I love springtime in the Midwest. It is a slow-moving affair that allows each variety of flower it's own moment to take center stage. Saucer Magnolias appear first of all. Their pink tipped white buds closed for days and days until the temperature is warm enough for them to open. 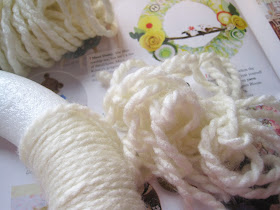 Crocus circling the roots of trees,  Red Bud seen in still brown woods, daffodils bunched happily together, tulips regal above their stems. Crafting again after such a long time feels exactly the way spring does to me. My awkward fingers feel as though they too are coming to life after a long winter's nap. A project spied in the margins of Molly Makes, a perfect place to begin. 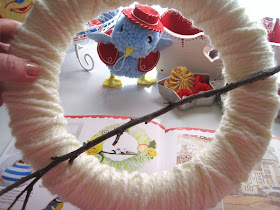 I have always enjoyed these wonderful yarn wreaths. I chose a nice, bumpy off-white yarn which I wrapped first side by side and then at intervals, crossing the yarn to give a more textured appearance.  A branch snapped from my Chinese Rose Blossom tree, hot glued in place. 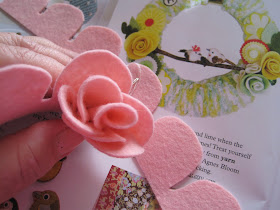 My "Use What's on Hand" philosophy of crafting has my gardenias being made from pink felt. I have cut long strips which then have been scalloped. Roll tight the first scalloped and then placed it in the center of the next scallop. Taking stitches with needle and thread with each petal placed. 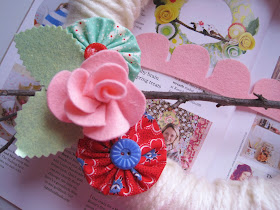 Fabric yo yos make a nice contrast to the pink. 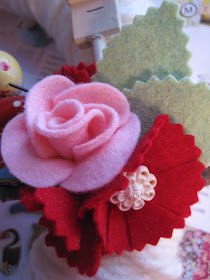 Flowers made for the right side of the wreath are slightly smaller in scale. I have pinked rounds and snipped with my scissors every fourth pink to nearly the center. Carnations, I love them! 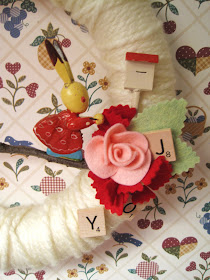 Needing my Creative Breathing signature, a word plucked from my new Scrabble game. A wooden Easter ornament that has seen many better days gives just the vintage touch I love so much. 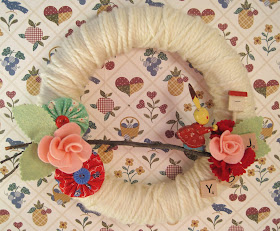 Charming! I absolutely love the way my yarn wreath has turned out. 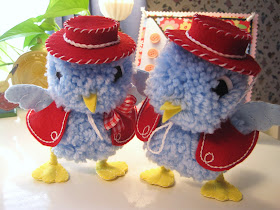 Young, single male pilots are a breed of men unto themselves. When they gather together they speak in acronyms that close by female listeners are unable to understand but are drawn closer as though lured.  The pilots stand tall to square the golden epaulets on their shirts and flash their boyish smiles that are brighter than the starry skies they cross. 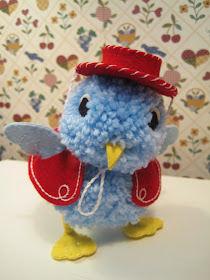 My dear sweet husband has witnessed the dance of the young pilots for more than twenty years now. Nearing retirement as a flight attendant, his habit is to have a glass of wine in the hotel and retire to his room to slip between the covers to sleep. But on a recent trip to Milan, Italy, it seems his own shirt was to sexy to resist. 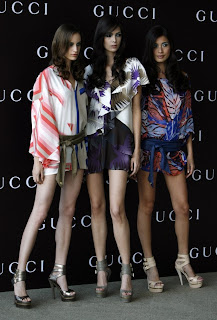 A late night arrival, lobby waiting, a group of ten young women gathered to ascend in the elevator. Legs up to here and hair down to there, they could only be the young pilots' counterpart - MODELS.  "Too bad they aren't headed for the hotel bar." was the sad comiseration among the young men. The Hard Rock Cafe instead beckoned from down the street, "Do you want to join us Pat?" "No guys, a glass of wine for me and I'm off to bed." 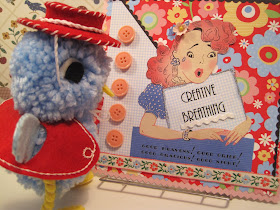 A table for one, a glass of wine, my husband found himself to be the only patron of the hotel's bar. A commotion heard coming, my husband couldn't believe his eyes to see the group of beautiful young models coming into the bar. Laughter growing louder, music overhead, one of the models approached my husband and said, "Sir, if we are too loud for you, please let us know." She returned to her friends leaving the distinguished older gentleman to himself. 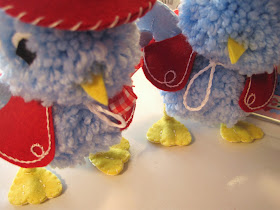 Soon two young men who had entered the hotel's bar with the models, ordered Champaign. Toasts are made, one young man approaches my husband with a glass. "Again I apologize for the noise so late at night.We have just arrived from the showings in London. These are the models for Gucci. In fact, the woman who approached you earlier is their top model, Natalia Vodianova. Why are you here sir so late at night?" 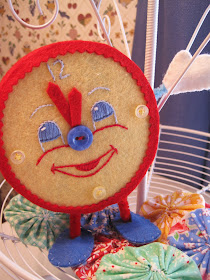 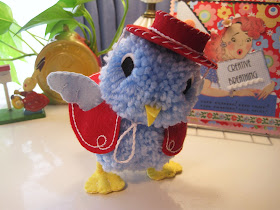 Within moments my husband found himself surrounded by the beautiful young women all wanting to take their picture with him and get his autograph! It most likely was the language barrier, but for this one moment... 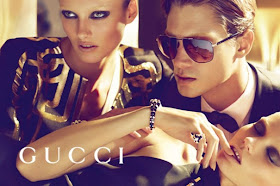 my husband was "much too sexy for his shirt!" 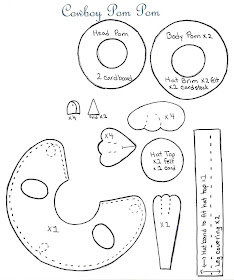